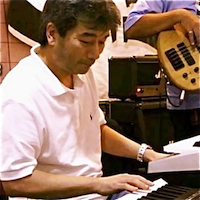 Japanese Smooth Jazz artist Shigeki Kawahara you could say is an internet success story that continues to be told. A very accomplished keyboardist/pianist, he began recording music in 1995 and released his first CD (and to date only full album) “Another World” in 2005. He had been doing music on the side while his day job as an economist takes him around the world. The convenience of the internet however, allowed him to release his music via the world wide web, catching the attention of FM DJs abroad.  The album was an online success leading Kawahara-san to form the jazz trio TIG (Three In the Groove) with Toru Ishiwata (guitar) and Hiroki Ide (drums). Previews of their music can be heard online on his myspace page. Kawahara’s and TIG’s music is reminiscent of smooth jazz legends like Joe Sample,  Bob James and FourPlay.

“Another World” and his other released singles are available via itunes and other online shops like CD Baby.