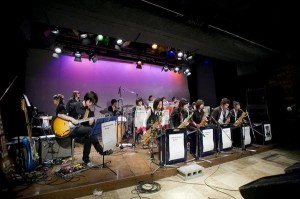 IN-CHIKI BAND is a Big Band with a long history. Officially forming in 2004 from members of the the Women’s Rythum Sounds Club, a group of a local college. Since then they have played around Japan and even toured in New York City playing in lengendary jazz spots The Blue Note and Birdland.

Originally playing jazz covers, the band’s sound has evolved into what their leader Ms. Ozawa calls the “IN CHIKI” style. A very fun band to see and listen to, especially live.